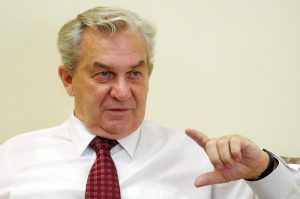 Attila Chikán is a Professor of Business Economics and Professor of Supply Chain Management, also Director of Competitiveness Research Centre of Corvinus University of Budapest (CUB).

He is a graduate of CUB (1967) and alumnus of the ICAME program of Stanford GSB (1972). He has been with CUBever since his graduation. He is founding Director (in 1970) and current President of Rajk László College for Advanced Studies. He is a member of the Board of Central European University.

He is author or co-author of over a dozen books and more than two dozens of papers in refereed international journals. He is a member of the Editorial Board of four Hungarian and four international journals. He is a Regular Member of the Hungarian Academy of Sciences, a Foreign Member of the Royal Swedish Academy of Engineering, an Honorary Doctor of University of Babes-Bolyai (Romania) and Lappeenranta University of Technology (Finland).